by Escape From Toytown 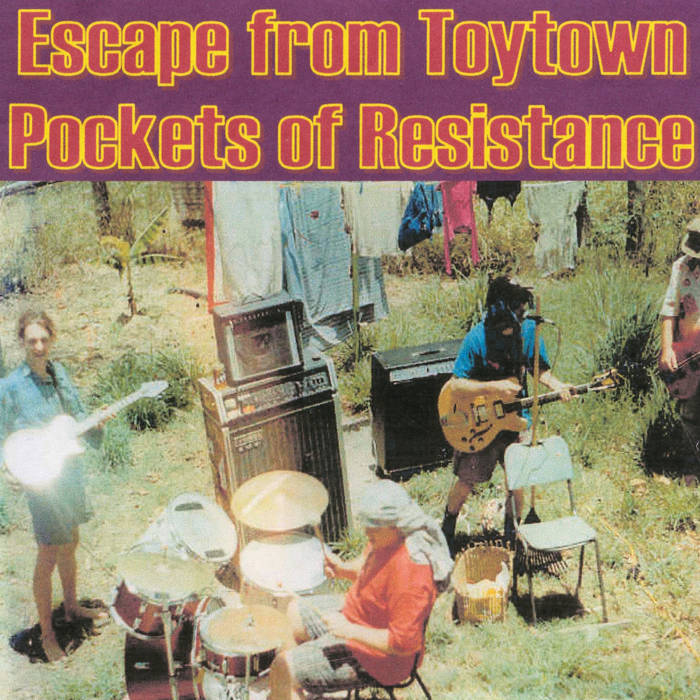 This is a compilation that featured tracks from the 1999 album 'Escapegoat' - 'Fine Mess', 'If You're Sick', 'Leave It In The Ground", "Hitler Was A Smacko", "White Man Spears Tim Fischer", "For You", "Our Ground" and "Limboland".

'Criminal's and 'Into The Vortex' are from "When in Rome' which was released circa 2001.

"Fish And Chip Bitch From Ipswich" featured on 4ZZZ's 1996 'Behind The Banana Curtain" compilation.

'Triple Joke' was recorded with Alien Virus and Escape from Toytown members at a Treehuggers gig in 2004 and is the only recording but was a Toytown song and previously unreleased.

'Rocky Road to Dublin' (Irish trad. cover), 'Fuckhead Zone', and 'One Hell of Osama' are from the original 'Pockets of Resistance' compilation (home-made CD) from 2003.

'Fuckhead Zone' was written about a clash with friends from an Acid World gig getting bashed by fans of Violent Femmes leaving Festival Hall in 1995.
The cops arrested 6 punks, I don't think any Violent Femmes fans were arrested.

Escape From Toytown was named with the solo song 'Fuckhead Zone' by Cal Crilly because it was put on a cart at 4ZZZ sometime in 1995 and needed a band name.

The 'Junk Food and More Toys' cassette had the original 'Fish and Chip Bitch From Ipswich' song that was so wrecked from being played at 4ZZZ on a cart that by the time it got to number 1 on the Hot 100 it needed to be recorded again. There were no drums, I wrote it one night and recorded it under the house the next day with Rosi.

If anybody wants a copy of our "Escapegoat" CD, come and see me at a show!
Have fun everybody.
- Cal Crilly

All profit goes to www.OzHarvest.org

Rikki - vocals on 'Criminal' and 'Into The Vortex'