The Thundering Skies Of Disgraceland 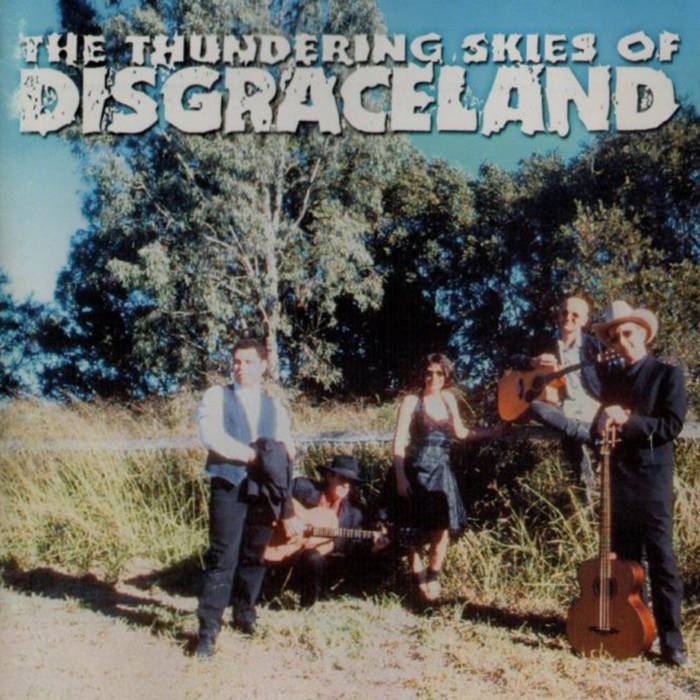 “Disgraceland formed in Brisbane in 1993 and write and perform songs of shameful admissions, troubled souls and love lost or misplaced. Moody country lounge music, a soundtrack to a film of the conscience, a bus ride to the tender and sore spots of the heart.”

I think it was probably all Kym’s idea, though Rod came up with the name. It’s just the best name.

Kym, Cooj and Tony, me and Mick – very easy on the eye. We had lots of laughs in practice rooms, mainly under the house in Green Terrace, Windsor. The songs came from Kym and Cooj, dressed by the other 3 of us. We liked our sound. It was different. We swapped around – drums, bass, lap steel, fiddle. There was always something going on.

We had some fans I guess, but I can’t remember who. Except one, who paid for us to record an album. We went into Leon’s Sunshine in the Valley with Joe Malone. We had a fun time, everyone showing off how great they were at stuff.

The album got printed and we launched it at the Basement in the now disappeared Travelodge in Roma Street. And then, not long after, Mick disappeared too. We were very sad about that. We’d been buddies for so long, more than 20 years. His voice remains in our head; his music, in our heart.

The songs can look after themselves, now. And we are as pleased as punch that you can hear them. The songs and the sounds were treasures; the gold and silver that we mined from our friendship.

“Bell, book, and candle shall not drive me back,
When gold and silver becks me to come on.”
- WS

Mastered at Joe's place in Zillmere