Music From the State of Corruption 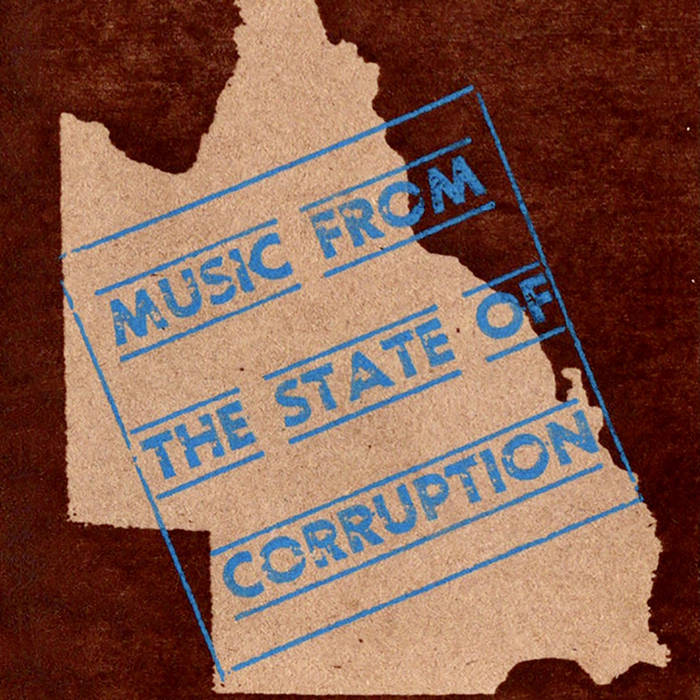 I left Brisbane to take up work in Canberra at the beginning of 1985. This effectively ended Eugene and the Egg (for the time being at least). I played and recorded a bit of music while living and working in the political hotbed of the national capital but, basically, I wasn’t doing much in the way of music except listening to records, watching music videos, seeing bands and talking about music to anyone who would listen. My wife, at the time, suggested that I put together an album of my favourite Brisbane bands. If I remember correctly, the big thing for her was the name she had come up with for the album, “Music from the State of Corruption”. Seemed a good name and idea.

Anton, from Eugene and the Egg, had a talent for straight-faced spoof. I asked him for a theme song for the album. Scorsese’s classic, King of Comedy, was big at the time, which led Anton to adopt the alter-ego of Rupert Pupkin and create the stellar anthem, The State of Corruption, which kicks off the album. As soon as I heard it, I knew we had a hit! Well, maybe a hit in another universe. It was certainly hilarious.

By 1988, René and Anton from Eugene and the Egg were living in Sydney, and I was often visiting to spend the weekend there. Over a couple of weekends, we got together to rehearse and record a few tracks for the album in a studio in Newtown.

Most of the other tracks on the cassette come from bands that I was a huge fan of back when I lived in Brisbane. I was a big fan of Other Voices. They were a great live act. My brother in law happened to be in the band too. I wanted one of their songs for the album. Not sure why, but they gave me the A-side of their, then around year old, single. Undoubtedly, She Walks Down is a brilliant song.

This Five Minutes were another favourite Brisbane band. I had played their Swing Between the Flags cassette to death! Sometimes (The Night Time) comes from that cassette.

I was also a big fan of I Am Vertical, especially their Collapse into Autumn cassette. I had heard Ray Moynihan and Geoff Wood from the band were now living in Sydney and recording together. They gave me VV Virginia W to put on the cassette.

I recollect dancing to Scrap Metal at the Exchange Hotel sometime around 80/81. Scrap Metal always got the mods from the Purple Hearts Scooter Club up and bopping when they played Standards by the Jam and The Kids are Alright by the Who. Great stuff! I’m pretty sure that they opened when the Clash played Cloudland. I can swear it was them, but it was a hell of a long time ago and my memory is a bit rusty. Scrap Metal changed their sound a bit when they became Ducks in Formation, around which time they supported Echo and the Bunnymen on their first Australian tour. Then they moved to Sydney and became Peso Kim. I don’t recall mods going to Peso Kim gigs but Peso Kim remained a stylishly dressed band.

I had met Johnny Statham who was the main creative force behind K Agents at Brisbane parties and I knew a few guys who played in his band. I loved their EP, Outside the Hotel, and wanted a track from it. The tracks were so short, and so good, that I put two of them on the cassette.

There were a couple of acts on the cassette that I didn’t know much about when I first started thinking about putting together a compilation cassette of Brisbane bands. I got leads for both bands from guys that I worked with in Canberra. One guy used to play in Downtown Five and One Big Union, while the other went to Griffith University with someone connected with some band called the Pineapples from the Dawn of Time. They were good connections to make, that’s for sure!

The Music on The State of Corruption cassette was released in August 1989. It sold in independent record shops in Brisbane, Sydney and Canberra. The cassette came in a brown paper bag along with several $400,000 banknotes. Just the thing for making those out-of-court defamation payments!

TONY PUPKIN-NOT PUMPKIN! – the King of Comedy alter-ego of Anton Chekhov (aka Anthony Biancotti from The Happy Men & Anton and the Egg).

EUGENE AND THE EGG – a three piece including Eugene Shannon, René Ranke and Anton Chekhov, which initially played in Brisbane from 1983 to 1984. One of their songs, View from the Edge, appeared on the Queensland in Quarantine cassette in 1984. A rerecorded version of the song appears on this cassette along with their psychedelic magnum opus, No Recognition. Eugene and the Egg reformed in 2014.

OTHER VOICES – formed in Brisbane in 1982. Originally called Missing Words, the band included vocalist, Roger Norris, along with Richard Farmer, Glen Bevan, Cameron Earle and Graeme Norris. The band released a single (World War 3/Another Tuesday) while still in Brisbane. Paul McGrath joined the band on bass not long before Other Voices moved to Sydney where they released a single on the Waterfront label (She Walks Down/Cats Neva Land).

PINEAPPLES FROM THE DAWN OF TIME - who doesn’t know about the Pineapples? Their classic album, Shocker, was released on Shoddy Music in 1987. The line-up included King Farouk, Big John Featherduster, Vance Astro and Artie Jesus Rimbo; in reality, Michael Gilmore, Clem Lukey, Rod McCleod from Young Identites and Just Urbain, Kym Watling from Disgraceland, Michael Hiron from the Riptides, The Leftovers and the Plug Uglies, and Marco Halstead, Peter Kroll and John Downie from the Kingswoods. The band released a single in 1986, Too Much Acid/Saha. This cassette includes a different mix of Too Much Acid to that of the single.

THIS FIVE MINUTES – the original three piece included Tony Moore, Greg Gilbert and Tom McKeon. The song, Sometimes (The Night Time), comes from their 1982 cassette, Swing Between the Flags, released on Cubbyhouse. A single, How/Reaction Time, was released in 1983 and the track, Sunday Afternoon, appeared on the Queensland in Quarantine cassette in 1984. Most of the members of This Five Minutes went on to form Dog Fish Cat Bird. Tony Moore currently plays in the Galilee Three.

TRASH & TREASURE – Brisbane ex-pats Ray Moynihan (I Am Vertical, Furious Turtles) and Geoff Wood (I Am Vertical) combined their creative forces in Sydney.

K AGENTS – John Statham (guitar & vocals & kegs), Tony Anderton (keyboards), Jamie Knowles (drums and esky) and David J Bust (bass) released an EP, Outside the Hotel, on Platypus in 1985. The two tracks on this cassette come from this EP. An earlier incarnation of the K-Agents (with Nigel Brando on bass and Ace Preston on drums) released a cassette, This Ain’t No Take, in 1984.

PESO KIM – Brisbane band that moved to Sydney where they released a single, Run For Cover/Hello, on Waterfront in 1986. Peso Kim originally evolved from Scrap Metal, which played original songs alongside mod standards from the Jam and the Who. Scrap Metal, in turn, evolved into Ducks in Formation, which released a 12 inch EP on the Green label in 1982. Original members, Alex Waller and John McQueen, continue to play in Generation Jones.

ONE BIG UNION – grew out of the Gold Coast band, Downtown Five. One Big Union released a single Conscience/Question of Culture on Sundown in 1985 and their track, Bullet Through the Wallet, appeared on the 4ZZZ compilation album, State of Emergence, in 1986.

Digitised from the master cassette tape by Michael Leo.